Seventy years ago, the first front of the Cold War opened up in Berlin, and if not for tireless work by American pilots, the entire European continent could have fallen to the Soviet Union.

“The Candy Bombers” is an amazing story about an amazing victory of intrepid pilots and stalwart Berliners in a tinderbox that almost was lit. That the Soviets never advanced an inch westward after trying to starve out the western half of the city is a testament to victory. As the American army drew down after World War II and hundreds of thousands of men went home, the Soviet Union pressed their advantage and took several Eastern European nations. America drew back into itself and was not eager to get involved.

That all had to change after the Soviets attempted to force the U.S., Britain and France out of their sector of occupied Berlin. Stuck in the middle of the Soviet zone, it looked like they’d succeed, until President Truman decided not to let it happen.

Half the military men around him wanted to send troops to break the blockade, and half wanted him to abandon the city altogether. In the background loomed the very real possibility of nuclear war.

But Truman found the middle ground, approving the greatest, most successful airlift in history.

It’s hard to believe that at the end of the war, both Germans and Americans were still filled with uncertainty and hate, and so didn’t trust each other. This blockade and the candy drops helped melt that ice.

Also interesting is that the late Franklin Roosevelt and his partisans wanted to throw the UK overboard in favor of befriending the Soviets. Had FDR not made a last-minute decision to switch vice presidents, socialist Henry Wallace would have been president. He certainly would have stood aside and let the Soviets do as they pleased.

This is a great story of near misses and valor, and also of hatred and uncertainty, ending with the West German people unbowed, the U.S. taking its place in the postwar world, and the Soviets stymied but still dangerous.

I recommend this book.

Dig deep into the mind and motivations of one of the most famous killers in history, Charles Manson, in this fascinating book.

“Charlie” represents the dark underside of the ’60s, the antithesis of Peace and Love – but as this excellent book points out, the light and dark weren’t so far apart in these tumultuous times. 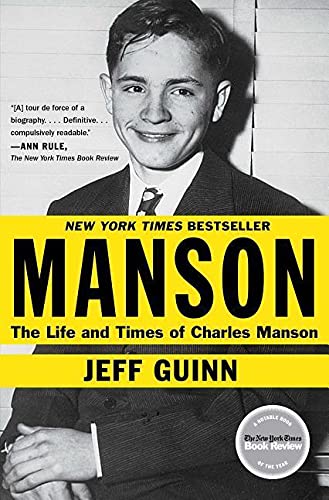 This book starts at the beginning – actually, before the beginning, with Manson’s mother’s family, her own law struggles and her unexpected pregnancy that begat “Charlie” – which is what they always called him.

Unlike Manson’s telling of the tale later (he was a notorious liar, this is clear), she wasn’t a prostitute and he wasn’t abandoned. But she was a party girl who left her little boy with a series of babysitters, from family to strangers. So, in a sense, maybe Charlie was abandoned.

He himself ends up in reform school, then jail, then prison, again and again. With little real schooling and a manipulative personality, and an overinflated sense of his own musical ability, Charlie sets out to become a famous rock star. And he collects girls to make his plan come true.

Dennis Wilson of the Beach Boys is part of the story, of course, as is Doris Day’s son Terry Melcher, one of the biggest record producers in LA at the time. That part of the story is well-worn, and many other books go over this ground, including “Helter Skelter.”

The most interesting thing about this book is the development of Manson’s methods – a jailhouse mélange of pimp schooling, Scientology and Dale Carnegie – and the slow buildup of events that lead to the famous murders. The impending doom carries some weight as we head into the Tate-LaBianca killings.

The trials follow, and although amusing and infuriating, the dread of the previous chapters is gone by this time. But the book really wouldn’t have been complete without them.

Reading this soon after Manson’s death, this book gave me a fresh look at a strange time in history, one that becomes increasingly dark the further away we are from it. Manson’s murders weren’t the worst or the most, but they seem to have taken the lid off decades of hell that have followed.

If you can take it, this book is recommended.

The U.S. wasn’t yet a nation of newspaper readers, and the newspapers that did exist didn’t cater to the ordinary citizen. That all changed with the New York Sun and its tantalizing story about a moon teeming with life – a fake story, designed to grab circulation.

The Sun opened up shop as a penny paper, cheaper than the usual six-cent broadsheets, and looked to make a splash. That it did with a series of stories in 1835 purporting to share details of new scientific discoveries of life on the moon ­– including unicorns, bipedal beavers and man-bats. In reality, writer Richard Adams Locke crafted the fake story and changed the face of journalism. 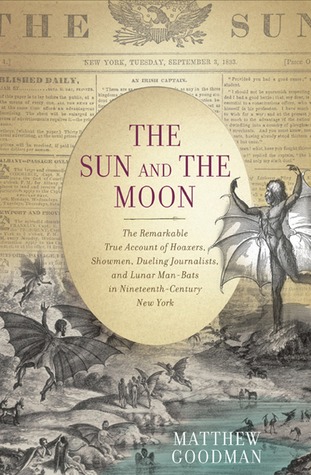 The book involves some publishers of the day and even wraps in two unexpected figures: Edgar Allan Poe and P.T. Barnum.

What follows is a rollicking tour through the writing and literature of the day, and the exploits of Poe, Barnum and the writers.

The “Moon Hoax of 1835” caught the imagination of the public, and was a success on many levels, even when the hoax was found out. Poe was at once jealous of and impressed with the story – he had written a moon story months before and thought Locke stole parts of it. Barnum, soon to be a noted hoaxer himself, learned a few lessons.

A couple of complaints – the book didn’t proceed linearly, so the jumps back and forth were confusing at times. Also, the author of this book allowed himself to take more than a few swipes at religion in general and Christianity in particular. It seemed like an odd addition to the story, until you come upon the author’s own, new conclusion:

The “Moon Hoax” was actually a Moon Satire, he says. It was intended as a critique of religious faith and thought. How he arrived at this is murky, and Locke never seemed to have said that himself. But this conclusion doesn’t hold if he doesn’t attack religion in the first place, so that explains it.

I don’t know if I buy the conclusion, but this otherwise is a good book, a celebration of maybe one of the first “fake news” successes, showing just how far some media will go to line their pockets.